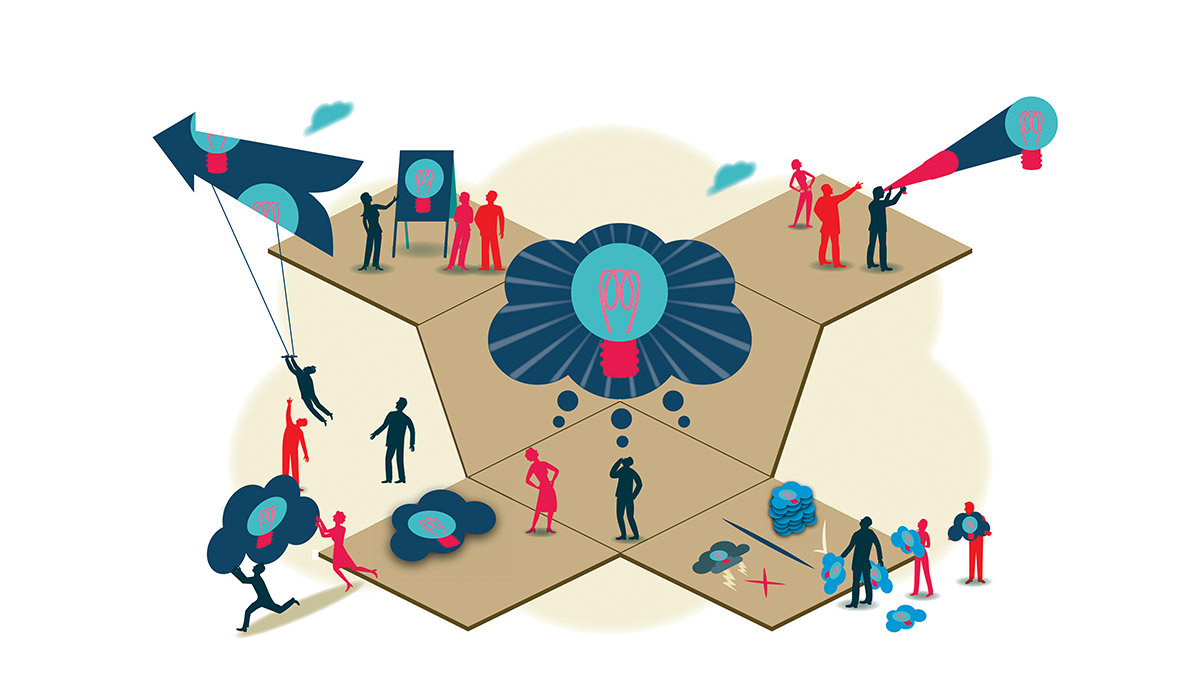 When venture capitalists (VCs) evaluate investment proposals, the language they use to describe the entrepreneurs who write them plays an important but often hidden role in shaping who is awarded funding and why. But it’s difficult to obtain VCs’ unvarnished comments, given that they are uttered behind closed doors. We were given access to government venture capital decision-making meetings in Sweden and were able to observe the types of language that VCs used over a two-year period. One major thing stuck out: The language used to describe male and female entrepreneurs was radically different. And these differences have very real consequences for those seeking funding — and for society in general.

Before discussing our research, it’s worth proving a bit of context about government venture capitalists, which rank among the most significant financial sources for entrepreneurship. In the European Union, government VCs allocated €3,621,000,000 to finance innovation and growth in small and medium-size businesses from 2007 to 2013. Worldwide, government venture capital is important for bridging significant financial gaps and supporting innovation and growth, as VCs can take risks where banks are not allowed to. When uncertainty is high regarding assessment of product and market potential, for example, the assessment of the entrepreneur’s potential becomes highly central in government VCs’ decision making.

In Sweden, about one-third of businesses are owned and run by women, although they are not granted a corresponding proportion of government funding. In fact, women-owned businesses receive much less — only 13%–18%, the rest going to male-owned companies.

This brings us back to our research. From 2009 to 2010 we were invited to silently observe governmental VC decision-making meetings and, more important, the conversations they had about entrepreneurs applying for funding. The initial aim of our work was to study financial decision making and help the group to develop their processes, not to look for gendered discourse. But as we put together our data, the presence of gendered discourse was clear and abundant, leading us to take a closer look.

All told, we observed closed-room, face-to-face discussions leading final funding decisions for 125 venture applications. Of these, 99 (79%) were from male entrepreneurs and 26 (21%) were from female entrepreneurs. The group of government venture capitalists observed included seven individuals: two women and five men. Our observations amounted to a total of 36 hours of decision-making time, the recordings resulting in a total of 210 transcribed pages. Once the data was coded, we translated the expressions from Swedish to English. To ensure accuracy, we then back-translated the expressions within our research group and used an academic linguist for quality control in this process.

In our analyses of these conversations, we looked at how entrepreneurial potential was expressed and how the financiers referred to men and women generally. We identified words and sentences used to describe the entrepreneurs, comments on appearance and dress, and the general dynamics in the decision dialogues and rhetoric. This approach provided a base for delineating and aggregating themes, which served as a basis for identifying several common discursive routes.

Aside from a few exceptions, the financiers rhetorically produce stereotypical images of women as having qualities opposite to those considered important to being an entrepreneur, with VCs questioning their credibility, trustworthiness, experience, and knowledge.

Conversely, when assessing male entrepreneurs, financiers leaned on stereotypical beliefs about men that reinforced their entrepreneurial potential. Male entrepreneurs were commonly described as being assertive, innovative, competent, experienced, knowledgeable, and having established networks.

We developed male and female entrepreneur personas based on our findings, which are illustrated below with quotes from the venture capitalists. 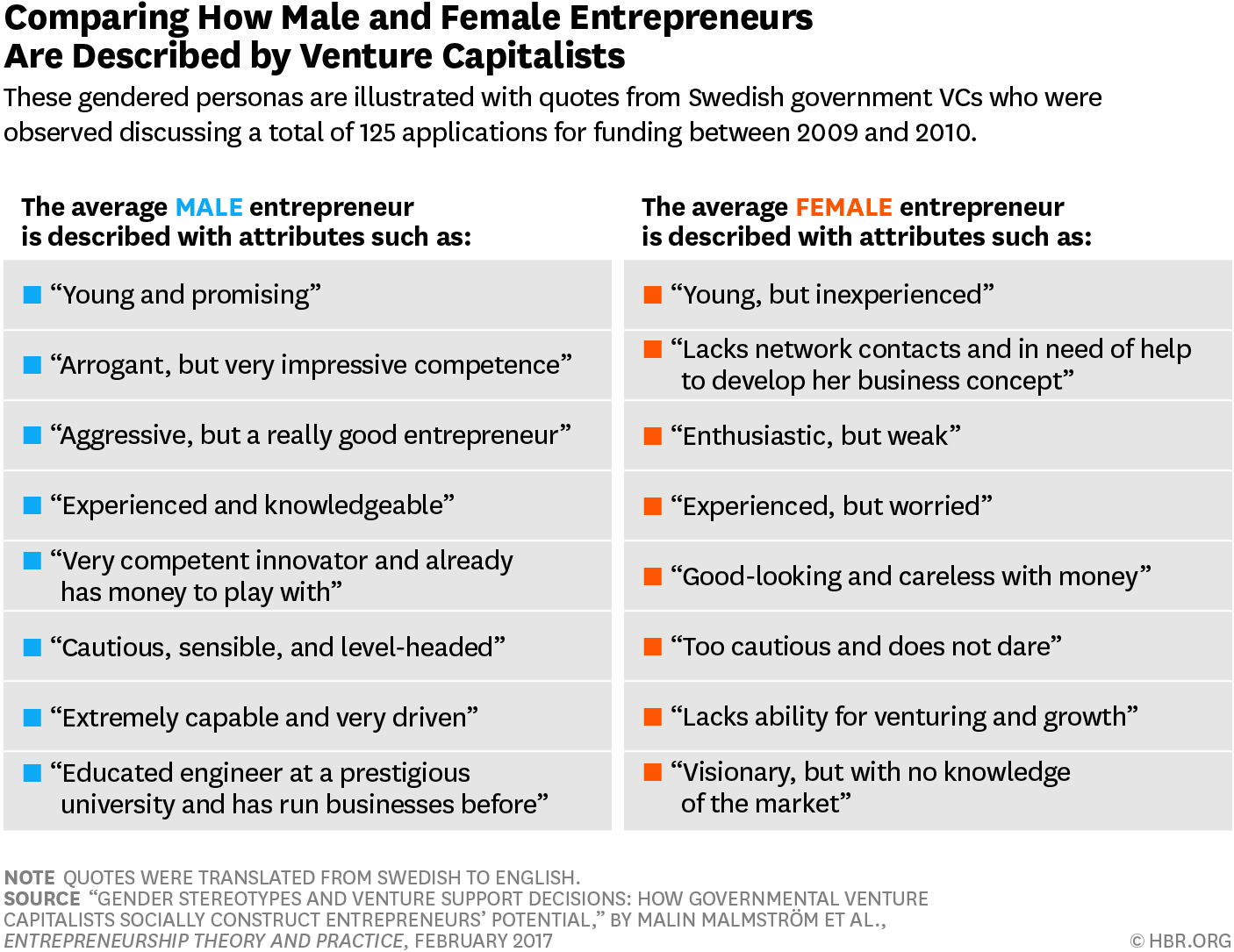 These personas highlight a few key differences in how the entrepreneurs were perceived depending on their gender. Men were characterized as having entrepreneurial potential, while the entrepreneurial potential for women was diminished. Many of the young men and women were described as being young, though youth for men was viewed as promising, while young women were considered inexperienced. Men were praised for being viewed as aggressive or arrogant, while women’s experience and excitement were tempered by discussions of their emotional shortcomings. Similarly, cautiousness was viewed very differently depending on the gender of the entrepreneur.

Unsurprisingly, these stereotypes seem to have played a role in who got funding and who didn’t. Women entrepreneurs were only awarded, on average, 25% of the applied-for amount, whereas men received, on average, 52% of what they asked for. Women were also denied financing to a greater extent than men, with close to 53% of women having their applications dismissed, compared with 38% of men. This is remarkable, given that government VCs are required to take into account national and European equality criteria and multiple gender requirements in their financial decision making.

When we presented our results to the government VCs, there were many reactions. At a national level, our findings had a positive impact and came to influence the development of a new strategy for the distribution of government VC funds. They also influenced the development of new regulations. At the organizational and individual levels, the VCs reacted with a mixture of emotions: despair for being involved in creating bias, denial of being part of it, becoming upset with the facts, and feeling relief about the fact that gender bias was finally becoming transparent.

To be sure, our focus on one type of financier might limit the generalization of our analysis. But broadly, our research suggests that stereotyping through language underpins the image of a man as a true entrepreneur while undermining the image of a woman as the same. Such stereotyping will inevitably influence the distribution of financing, but could also have other major consequences. Because the purpose of government venture capital is to use tax money to stimulate growth and value creation for society as a whole, gender bias presents the risk that the money isn’t being invested in businesses that have the highest potential. This isn’t only damaging for women entrepreneurs; it’s potentially damaging for society as a whole.