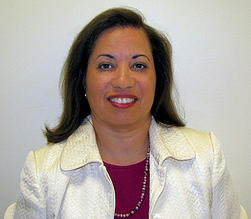 Maria Otero, Esq., launched the Women’s Venture Fund in 1996 with the idea that women could succeed as entrepreneurs when they could access credit and resources. She is often asked to comment on “women in business” and the critical success factors essential to nurturing and developing the entrepreneurial spirit. Maria routinely serves as a speaker at forums focused on issues affecting minorities and women’s economic development. She has assisted in the development of public policy through presentations to foreign delegations visiting the U.S. through arrangements with the State Department and has given feedback to local policy makers as a former Commissioner on the New York City Commission on Women’s Issues, as well as held several discussions with local legislators regarding the challenges women entrepreneurs face in this economy.

For her contributions to the development of women business owners, Maria has received numerous honors including Bloomberg’s Hispanic Entrepreneur Award, the Financial Women’s Association public service award¸ U.S. Women’s Chamber of Commerce recognition, and the Small Business Administration excellence award. As an expert in her field, she has served as a judge in various national and regional competitions focused on entrepreneurship such as the Forbes SmallBusiness competition, Baruch’s entrepreneurship competition, and the NYC Women’s Small Business Competition reviewing thousands of business plans and helping to select competition winners.

She began her career as an attorney with various regulatory agencies and served as Attorney General for environmental issues. She received a J.D. from the University of Pennsylvania Law School and a B.A. from Queens College.

Board of Directors
Go to Top