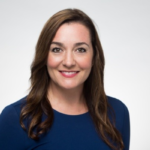 Jacqueline previously served as Head of Government Affairs & Public Policy, North America for S&P Global. In this capacity, she managed outreach and advocacy for the firm’s four lines of business with regulators, third party groups, think tanks, trade associations and media, in coordination with teams in EMEA and APAC.

Jacqueline joined the company in 2015 as Senior Director of Communications for S&P Global. In that role she helped the firm expand its media footprint with influencers, regulators, and key stakeholders.

Prior to joining the firm, Jacqueline served as Director, Federal Legislative Affairs for Verizon. There she developed the firm’s policies and communications on such issues as mobile payments, mobile banking, global emerging markets, job creation, trade, and microfinance.

She is honored to be an advisory board member of the Women’s Venture Fund. Jacqueline holds a Bachelor of Arts from Saint Joseph’s University, Pennsylvania, and certificates from Harvard Business School in Management and Columbia Business School in Digital Marketing