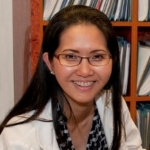 Pinky hails from the Philippines where she worked at the University of Philippines’s General Hospital as Chief Occupational Therapist and Clinical Training Coordinator. She went on to become a consultant to Rehab Partners in Manila and left that post to come to the U.S. on a work visa securing a post as Pediatric Occupational Therapist at Rehab Resources, Inc. She became a U.S. citizen in 2008 and held positions in hospitals and clinics including Lincoln Hospital Center and NYU Rusk Outpatient Center.

During her work in NYC medical facilities, Pinky saw that many of the patients living in the Bronx had to travel far for treatment because there were few practitioners in their communities. She addressed this gap by opening a practice in the Bronx in September of 2013.

Her relationship with doctors lead to referrals and a busy practice in a few short months. To better serve her patients, Russalette sought a loan for additional equipment. That process proved frustrating and unproductive for her. When she came to Women’s Venture Fund, we could see that Russalette had the skills and experience to grow this practice with a little guidance in understanding her financial data. WVF provided her with a loan to buy equipment and hire contractors; rand worked with her to better manage her growth by clearly tracking her cashflow. As Russalette’s patient load increases, her team is also expanding, providing employment opportunities within the community.

We caught up with Pinky recently. Her clientele has grown two-fold since she opened, mainly due to word-of-mouth and referral from the many doctors in her network. At the same time, she has streamlined operations, improving efficiency including full-time, fully engaged staff rather than a roster of contractors; and outsourcing the billing function. She credits WVF training and
advisory for making better business decisions and forging profitable partnerships. She credits WVF with keeping in contact with her to ensure she’s on track with her business goals and extending opportunities for further business training and networking opportunities. “WVF mentoring has been invaluable.”

Carmen Sanchez is like many WVF clients—a minority woman determined to grow her business to support her household, further the ambitions of her children and provide herself an income for retirement. She came to the U.S. from Columbia 18 years ago and like many immigrants initially took on jobs as a domestic, janitorial worker and factory worker to make ends meet. Carmen and her husband, now a retiree, have two children—a daughter who is a doctor and a son who works for the business.

Back in 2001, knowing how difficult it was for her and other immigrants to stay in touch with their families in Columbia, she purchased phone minutes in bulk and resold portions to her co-workers who couldn’t afford to buy the calling cards on their meager wages. From this humble beginning, she established a thriving calling center business in an area heavily populated by immigrants with a need to communicate with family and friends back home. Carmen further diversified, becoming the exclusive agent for Western Union in the neighborhood. This proved to be a lucrative revenue stream bringing in approximately one-third of her gross income.

Today Universal Frontier is thriving in its financial services business. WVF funded Carmen’s relocation to a more attractive space at a busy intersection in Far Rockaway. Legal advisors helped her resolve issues with the previous landlord to facilitate the move; and provided guidance on securing bids for the floor plans for her new location.

Carmen attributes the success of her relocation and expansion of services to cover travel arrangements, bill payments, money transfers. Carmen went on to secure a license as a broker for life, health, property and casualty insurance. Currently, she is working with WVF to identify insurance companies willing to partner with her business through an equitable partnership.

“I would not have been able to take this next step in growing my company without funding from WVF and the guidance of its staff,” she says.