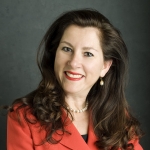 Angela is President and owner of Perez, APC, a global design-build-development firm that has been in operation for 70 years with 13 national offices. She leads complex design and construction projects worldwide including having secured the largest construction contract awarded a woman-owned business to date by the USAID-Afghanistan Mission. Angela is a Fellow of the American Institute of Architects and a LEED Accredited Professional.

Angela was born in Cali, Columbia and is of Hispanic descent though her last name, O’Byrne, comes from a distant Irish relative. Her parents brought the family to New Orleans when she was five. She  has always been artistic even as a small child, being heavily influenced by an aunt in the fashion industry and an uncle, an architect, who talked to her about his work when she was still living in Columbia. She loved visiting his office and seeing the wonderfully intricate models of buildings. At the age of 9, she won an art contest for the 7-19 year-old category, topping out 999 other entrants. She fondly remembers her love of the art lessons she dutifully undertook.

As an undergraduate at Tulane University, she was in a quandary when it came time to declare a major. Her grandfather was a dentist; and her father, a sister and a brother were doctors; and other siblings had married doctors. Despite the immediate family’s bent toward medicine, Angela decided to study design and after graduation embarked on her career in architecture in New York where she also married and had three children. She held positions in architectural firms, first in Lake Placid and later in NYC for 12 years. Then came a divorce and the move back to the family home in New Orleans. In 1998 she started working at Perez, a well-established architectural firm. The owner, Perez, was set to retire in 2000 and asked Angela if she would step in as the owner. But she had no money, bad debt and no credit. Perez wanted her at the helm so he put up the money that she was able to pay back to him over seven years.

The firm had 50 people on the payroll in 1998—down from 250 employees in the early 90s. That number dwindled to 25 due to lack of work. Then Katrina hit. At that point, Angela was down to a bookkeeper and a few part-timers and was working out of her car, going to clients’ offices where she was able to get repair work and eventually was able to hire five people. In a few short years, due to the demand for remediation work in New Orleans, she staffed up to 80 employees. Angela began to open offices nationwide, including an office in Brooklyn; and began to diversify her services to include construction work and real estate development. Then the recession hit and by 2010 her staff had been reduced by 50%.

One of the things she learned after hiring a consultant to help keep the business afloat was that being smart and working hard wasn’t enough  Often she would have to put in a proposal 10 times before winning a contract. The consultant stressed the importance of building strong business relationships. Angela began to regularly attend industry events and this year alone has logged in 72 events—many of which she has given some level of sponsorship. This level of engagement in the industry keeps her front of mind with agencies and other entities who have potential use of her expertise and services.
.
Angela came to WVF at the end of 2014 to secure a cash flow loan that would allow her to continue operations for a construction project which consisted of development work for the Hurricane Sandy rebuild initiative funded by the NYC Economic Development Corporation. With the WVF loan, she was able to move forward on that project and retain the 13-person staff she employs in Brooklyn.

Angela is a great supporter of groups that champion the advancement of women. As a woman in a male-dominated industry she has had her “challenges” as she puts it, particularly in the South. She fully understands that it is incumbent on women who succeed in business reach out to other women to share knowledge and experiences.

Ms. O’Byrne has won numerous awards including the Women’s Builders Council Outstanding Women of 2015 and the SBA Louisiana District Women-Owned Business of the Year in 2013. She was a guest speaker at WVF’s inaugural TakeFLIGHT Conference last June and looks forward to future collaboration with us.