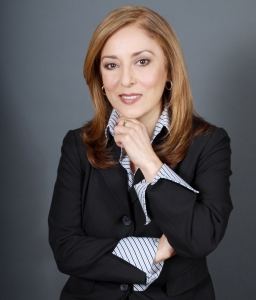 Yamila is an award-winning journalist, media executive, content creator and producer with over two decades of experience in the U.S., Latin America, and Europe. She is a principal and VP of Content and Production for eContenido and eContent Health an international TV production company. She launched Dinero y más, a financial education multiplatform for TV, radio, online, and mobile.

She acquired her financial expertise at Bloomberg where she held various positions, including Head of Production for the five European channels broadcast in five different languages, Executive Producer for Bloomberg Spanish-language TV and Radio, and Executive Producer for Bloomberg Networks, which
syndicated over 200 daily reports to 700 affiliates from Canada to Argentina. Her command of English, Spanish, and French combined with her solid experience as a producer and journalist, have positioned Yamila as a sought after resource by international media platforms.

Yamila was also commissioned to launch Bloomberg Television Latin America, and anchored a daily live show about U.S and Latin American financial markets. In 1998, she spearheaded the creation of
Negocios Bloomberg, the first nationally syndicated radio report to provide personal finance education to the Spanish-speaking audience in the U.S. Negocios Bloomberg won the NY Press Club Award for Best Business Writing, marking the first time it was given to a Spanish-language report. Early in her career Yamila was the NY Correspondent for NBC Canal de Noticias.

An honor graduate from New York University and recipient of the Founders Day Award, Yamila has also been included twice amongst Hispanic magazine’s list of One Hundred Top Latinas in the United States and is a winner of the USHCC Foundation At the Table Competition for female entrepreneurs.